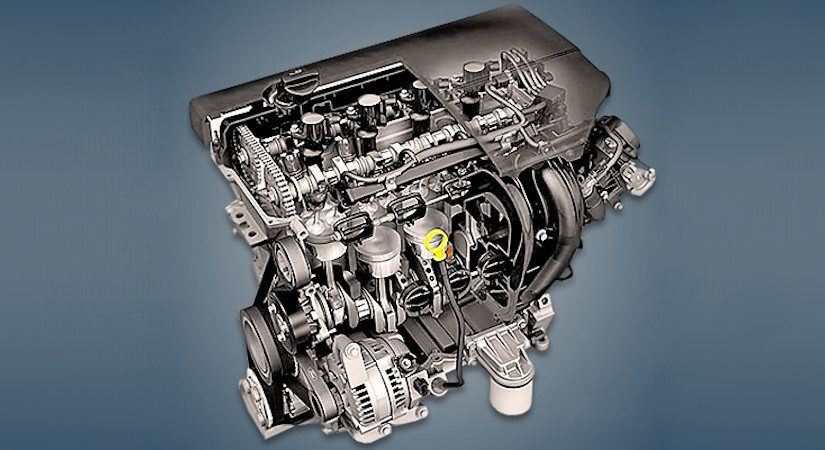 The 1.8-liter Ford QQDB / QQDA or 1.8 Duratec HE engine was assembled from 2003 to 2011 and was installed on the second generation of the Focus model or the C-Max compact MPV, created on its basis. This power unit is essentially a clone of the famous Japanese Mazda MZR L8-DE engine.

The 1.8 Duratec engine is simple, but it has sore spots. For example, modifications require intake manifold swirl flaps. In many cases, this engine needs piston ring replacement to treat oil consumption. And the procedure for adjusting the thermal clearances of the valves costs an indecent amount.

On Duratec motors, with a run of about 200,000 km, fogging may form at the junction of the block and gearbox. In most cases, the lower bolts of the crankshaft rear oil seal are to blame for oil leaks in this place. From vibrations, they just get out a little and let the oil flow. That is, in most cases, the gland is not to blame.

From the beginning of 2008 to the middle of 2009, 1.8 Duratec HE engines changed a defective tensioner during a recall campaign. Due to its skewed roller and lack of lubrication, the whistle of the attachment belt and the roller itself was heard in it.

The 1.8 Duratec engine has been troubling owners with fluctuating idle speeds and accompanying symptoms such as slow rpm drop when coasting. If these problems do not disappear after flashing and flushing the damper, if the damper position sensor is working, then the problem is probably in the damper itself. Namely, in the wear of the plastic gears of its gearbox. The servo cover can be easily removed, after which you can evaluate the play of the gears. If there is backlash, then there are many options for solving the problem: from replacing the damper, printing gears on a 3D printer, to eliminating the backlash of worn gears using superglue and soda (a popular and extremely inexpensive method).

If the 1.8 Duratec engine speed float stops when the clutch pedal is depressed, then the culprit is a faulty clutch pedal sensor.

The EGR valve is considered the main culprit for throttle fouling. It is very easy to turn it off: disassemble and remove the valve stem. Then they collect and put in place.

There are swirl flaps in the intake manifold directly in front of the cylinder head intake ports. They are covered at low engine speeds. At the same time, thanks to them, the air flows entering the cylinders are accelerated. At medium and high engine loads, these dampers open.

Flaps are a sore spot. Due to air pulsations, the plastic guides of the steel axle break the seats in the plastic of the damper housing. Therefore, when the engine is running, the dampers begin to rustle, rustle, clatter, staggering strongly in their windows. If, on a running engine, an extraneous sound disappears when the damper control valve is turned off or when the vacuum hose is removed from the actuator, then the problem is clearly with the dampers. On the Mondeo manifold, the swirl flap valve is located directly on the manifold next to the actuator. On other Duratec engines for Ford, Mazda and Volvo, this valve is located separately on the bar next to a similar valve that controls intake geometry.

On the 1.8 Duratec HE engine for the Ford Mondeo, on its Mazda counterparts, dampers and plastic guide bushings are sold separately. For the same engine for the Ford Focus, the flaps come entirely with a manifold, so eliminating the rustle of the flaps with new spare parts is very expensive.

The axis of the swirl flaps is driven by a vacuum actuator, which is controlled by an electro-vacuum valve located next to it. This valve often fails simply due to a broken contact in its terminal, such a valve does not ring. Due to a faulty damper valve, the dampers always remain open, mixture formation is disturbed, to which the engine reacts with a decrease in power at low speeds (up to about 2000 rpm), and fuel consumption also increases. Also, after starting the engine, the idle speed can drop very much, up to the engine stopping. An electrical failure of the valve is indicated by a corresponding error.

The lamellar timing chain serves about 200,000 – 250,000 km, must be replaced due to stretching. As with any chain timing engine, it rustles and clatters while the engine is running. When replacing the chain on this engine, it will not be superfluous to assess the condition of its tensioner: its rod should not play. It is also worth proactively changing the front crankshaft pulley.

Thermal valve clearances on the 1.8 Duratec engine need to be adjusted every 150,000 km. With incorrect clearances, this engine shakes at idle after warming up, it does not start the first time, engine thrust decreases, and fuel consumption increases. Noticeable problems due to valve clearances occur if they have not been adjusted for about 200,000 km. In search of a solution to these symptoms, owners and servicemen have time to double-check and change anything. And often the last step is to adjust the valves.

Owners pull with valve adjustment, tk. on this engine, this procedure is very expensive. As planned by the engineers, it is necessary to remove the cylinder head, remove and grind the valves, and then assemble the cylinder head and select calibrated pushers.

All Duratec engines with a volume of 1.8 to 2.3 liters sooner or later expect oil consumption, up to a liter per 1000 km. Although on rare specimens such a problem does not occur with a run of about 300,000 km with native factory piston rings. When the oil burns, the engine smokes heavily, and may also not reach maximum speed.

Before replacing piston rings, the cylinders must be checked for wear and ellipse. In many cases the sleeves will be fine with no wear.

We add that on Duratec warranty engines there were cases of scuffing on the cylinders due to the destruction of the catalyst. That is, ceramic dust that got into the cylinders led to severe wear of the cylinder mirror.