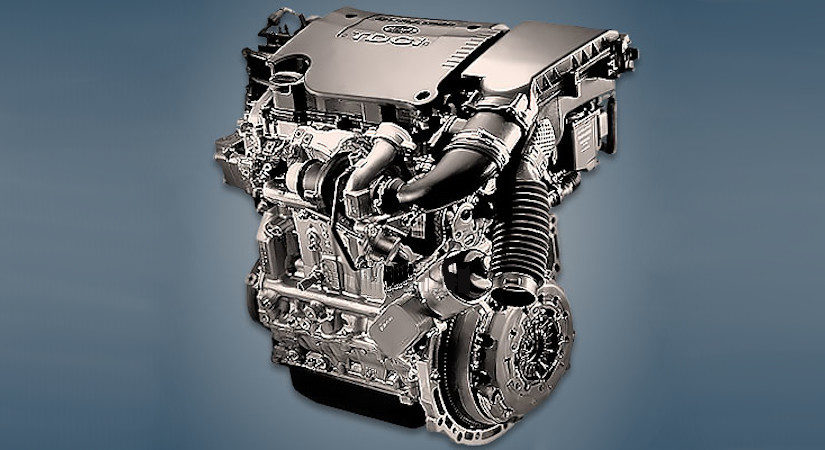 The 1.6-liter Ford 1.6 TDCi diesel engines were produced by the concern from 2004 to 2017 in two different generations: the first with a 16-valve cylinder head and the second with an 8-valve cylinder head. These diesels are known as Peugeot 1.6 HDi, Mazda 1.6 CiTD, Volvo D4162T and D4164T in other cars.

In 2003, a 1.6-liter diesel engine, created in a joint venture with PSA and known as the DV6 and 1.6 HDi, debuted on the first generation Ford C-Max model. It was quite a typical unit for that time: an aluminum block with cast-iron sleeves, an aluminum 16-valve cylinder head with two camshafts and hydraulic compensators, a combined timing drive in the form of a belt and a small chain with a tensioner between the camshafts, as well as a Bosch Common Rail fuel system with electromagnetic nozzles. Engine modifications under 100 hp were equipped with a conventional Mitsubishi TD025 turbine, while more powerful versions received a Garrett GT1544V variable geometry turbocharger.

In 2010, the second generation engines appeared, which received an 8-valve head and finally got rid of the rather problematic chain between the two camshafts. Even a newer generation Common Rail fuel system was installed on these engines: modifications up to 100 hp were equipped with Bosch with electromagnetic injectors, more powerful versions were already Siemens (later renamed Continental) with piezo injectors. Turbines are also different: weak engines received a regular Mitsubishi TD02H2 turbocharger, and versions with more than 100 hp were equipped with a variable geometry turbine Garrett GTC1244VZ.

In total, we know about 5 different modifications, plus each has several more versions:

In total, we know about 11 different modifications, plus each has several more versions:

Disadvantages of the Ford 1.6 TDCi engine