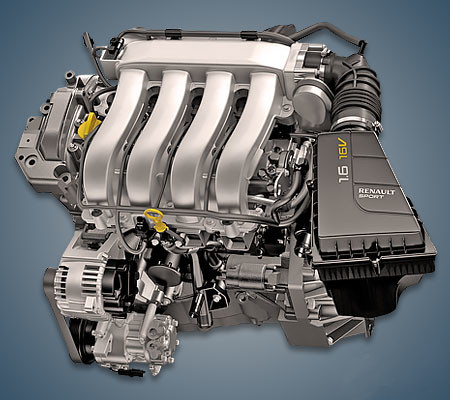 The 1.6-liter 16-valve Renault K4M engine was first introduced at the 1998 salon and is still actively produced at a plant in Spain, Turkey, and since 2009 at AvtoVAZ. There is a version of such a motor with and without a phase regulator, as well as a sports version of the RS.

In 1998, a 16-valve engine appeared in the Renault K-series powertrain range. In addition to the new block head with a pair of camshafts and hydraulic lifters, this motor received individual ignition coils, and in some versions, a phase regulator on the intake shaft. There was a forced version of the K4M RS for Clio GT models, as well as Wind or Twingo RS.

In all other respects, such an engine differs little from its 8-valve predecessors: there is a distributed fuel injection, an in-line cast-iron cylinder block, a timing belt drive. At first, the assembly of this motor was carried out only at the company’s Spanish plant in Valladolid, then an enterprise in Turkish Bursa was added to it, and in 2009, Togliatti AvtoVAZ.

Disadvantages of the Renault K4M engine