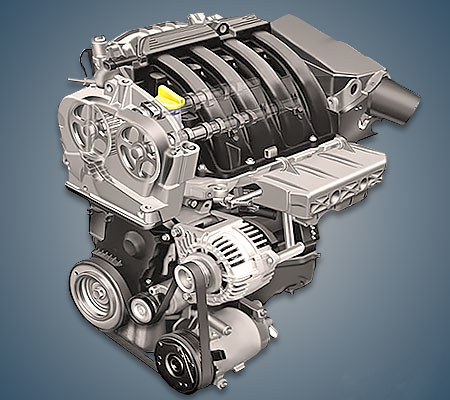 The 1.4-liter 16-valve Renault K4J engine was produced by the company from 1999 to 2013 and was installed on Clio, Megane, Scenic, but it was best known for the Symbol model. In addition to standard modifications in 95 – 100 hp, there was a derated version of 82 hp.

In 1999, the junior 16-valve 1.4-liter engine appeared in the K-series. By design, this is a typical engine for its time with distributed fuel injection, a cast-iron block and a timing belt drive. There is no phase regulator like on a 1.6-liter engine. It differed from its 8-valve counterparts in the series by the presence of a cylinder head with two camshafts, hydraulic lifters and individual ignition coils instead of one for 4 cylinders.

This power unit was produced in a narrow power range of 95 – 100 hp and 127 Nm of torque, and only Megane 2 was equipped with a version derated to 82 hp without an electronic throttle. It is also the only engine from the K-series that, at the end of the main release, did not go to the budget brand Dacia and sunk into oblivion after Renault Symbol was discontinued in 2013.

Disadvantages of the Renault K4J engine