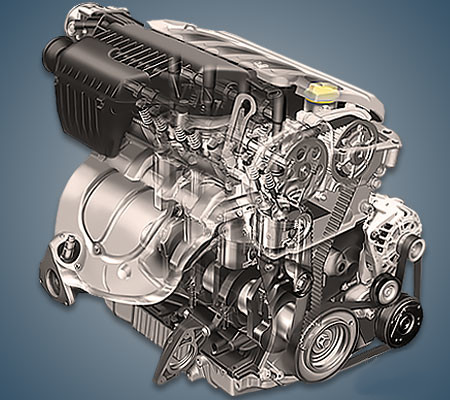 The 2.0-liter 16-valve Renault F4R engine has been assembled at the Cleon plant since 1998 and is still installed on some of the concern’s models for emerging markets. This unit has become widespread due to the installation on Duster and Kaptur.

In 1998, a 16-valve 2.0-liter power unit debuted on the Espace 3 model. In addition to the cylinder head with a pair of camshafts and hydraulic lifters, it differed from the 8-valve engines of the series by the presence of an ignition system with separate coils, as well as an intake dephaser. Otherwise, there is also an in-line 4-cylinder cast-iron block without sleeves and a timing belt drive.

Separately, it is worth writing about the forced modification of the unit for sports versions of the Clio. In 1999, Mecachrome engineers boosted this motor to 172 hp for the Clio II RS, and in 2004 the restyled Clio II RS received an even more powerful 182 hp engine. Sports modifications based on the third generation Clio were equipped with 197 and 200 hp versions.

Disadvantages of the Renault F4R engine