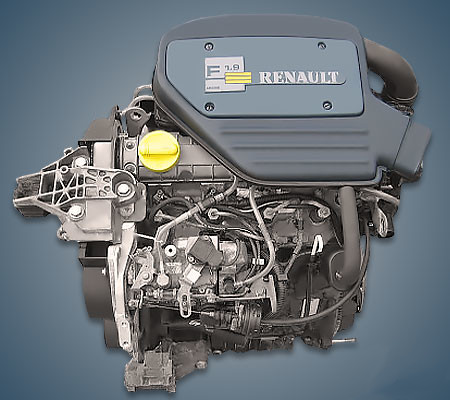 The 1.9-liter Renault F8Q diesel engine was assembled at the company’s plant from 1988 to 2006 and installed on cars such as Kangoo, Clio, Megan, Scenic, as well as Mitsubishi Carisma and Volvo S40. There was an atmospheric version of the engine with 64 hp and a turbocharged version with 90 hp.

In 1988, a new atmospheric diesel engine with a volume of 1.9 liters debuted on the Renault 19 model, which in fact was a modernization of the 1.6-liter F8M prechamber engine. Thanks to the increased displacement, the power of the updated engine has increased from 54 to 64 hp, although the Kangoo model has a version of the 1.9-liter engine derated to 54 hp. Otherwise, everything remained unchanged here: a cast-iron block with an aluminum 8-valve cylinder head without hydraulic lifters, a timing belt drive and a mechanical injection pump from Bosch, Lucas or Delphi.

A year later, a supercharged version of the diesel engine with a Garrett GT1544S turbine with a power of 90 hp appeared. In the 90s of the last century, this unit was installed on a number of popular models of the concern. The motor was constantly upgraded, over time, a more modern turbine and electronically controlled injection pump appeared here. F8Q engines were installed on Dacia cars until 2006.

Disadvantages of the Renault F8Q engine