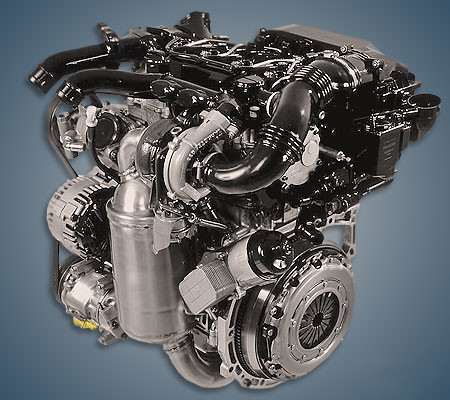 The 1.6-liter Peugeot DV6DTED or DV6D 1.6 e-HDi 92 engine was produced from 2009 to 2016 and was installed on many popular compact models of the French concern of its time. Such a unit was offered in two different versions: 9HP with a particulate filter and 9HJ without it.

In 2009, an updated version of the DV6A diesel unit debuted under the DV6D index. The main difference from its predecessor was the 8-valve head instead of the 16-valve, thanks to which it was possible to get rid of the chain between the camshafts, which often stretched. The aluminum 4-cylinder block with cast-iron liners was left unchanged here.

Fuel injection was carried out by the Bosch Common Rail system with electromagnetic injectors, plus all engine versions were supercharged in the form of a Mitsubishi TD02H2 turbine with a wastegate. Most units were equipped with a Start-Stop system, as evidenced by the e-HDi nameplate. Modifications of this engine for Euro 4 without a particulate filter were designated as DV6DTEDM.

Disadvantages of the DV6DTED engine