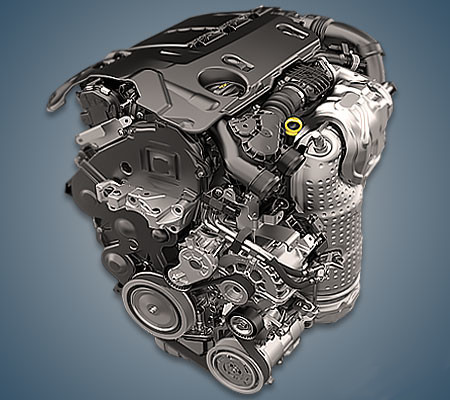 The 1.6-liter Peugeot DV6CTED or DV6C 1.6 e-HDi 115 engine was produced from 2009 to 2017 and was installed on many popular cars of the French concern of its time. There were two versions of this engine: 9HR for Euro 5 with a particulate filter and 9HG for Euro 4 without it.

In 2009, an updated version of the DV6TED4 diesel unit appeared under the DV6C index, which was distinguished by the presence of an 8-valve head instead of the 16-valve cylinder head of its predecessor. Thus, the new engine finally got rid of the problematic chain between the camshafts. But the aluminum 4-cylinder block with cast-iron sleeves did not receive any special changes.

The Siemens Common Rail system with piezo injectors is responsible for diesel fuel injection, supercharging is carried out by a Garrett GTC1244VZ turbine with variable geometry and an intercooler. Most versions of this diesel are equipped with a Start-Stop system and are designated as e-HDi, and there are modifications with Overboost that can increase torque by 15 Nm. In a number of markets, Euro 4 modifications of the DV6CTEDM unit without a particulate filter were offered.

Disadvantages of the DV6CTED engine