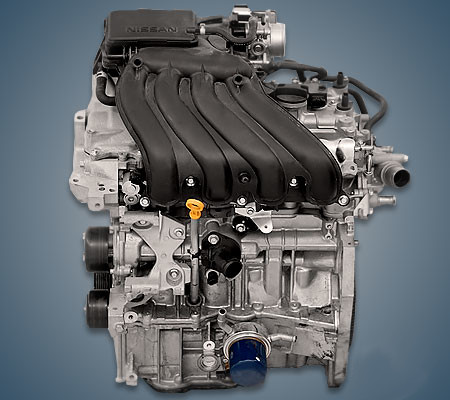 The Nissan HR16DE engine is a logical extension of the Renault K4M engine. The gas distribution mechanism and electronic control were mainly modernized. Also, the engine was equipped with a timing chain drive, new camshafts and two fuel injectors per cylinder. Hydraulic compensators were removed from the engine (adjustment by selection of pushers every 100 thousand km). The variable valve timing system remained on the intake shaft. The engine has become more economical than its predecessor, more powerful and more environmentally friendly.

The design was quite common for the Japanese engine industry of those years: an aluminum block with cast-iron sleeves and an open cooling jacket, an aluminum 16-valve head, a timing chain drive, an inlet dephaser and solid pushers instead of hydraulic compensators.

Disadvantages of the HR16DE engine