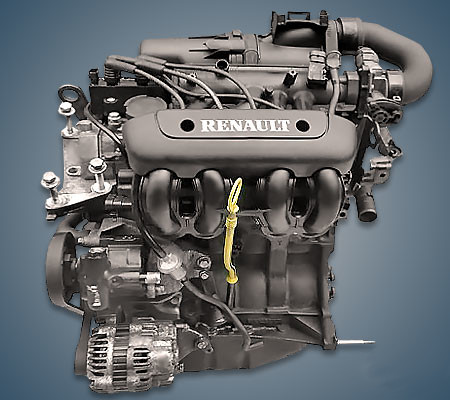 The 1.2-liter 8-valve Renault D7F engine was produced by the concern from 1996 to 2014 and was installed on the company’s most compact models such as Twingo, Clio or Kangoo. In the Brazilian market, a 1.0-liter modification of this engine with the D7D index was offered.

In 1996, Renault engineers introduced a compact engine designed for the Twingo model. Despite its small size, this engine had an in-line cast-iron 4-cylinder block, an 8-valve cylinder head without hydraulic lifters, a single ignition coil and a timing belt drive. Fuel injection here is distributed, which distinguishes it from older engines with single injection.

The first power units with indices 700 and 701 developed 58 hp and 93 Nm of torque, and after the update in 2001, the engines 702, 703 and 704 slightly increased power to 60 hp. On the first generation Clio model, there was a 730 modification derated to 54 hp, on the Clio 2 they installed a particularly economical gas version with a torque reduced to 88 Nm.

Disadvantages of the Renault D7F engine