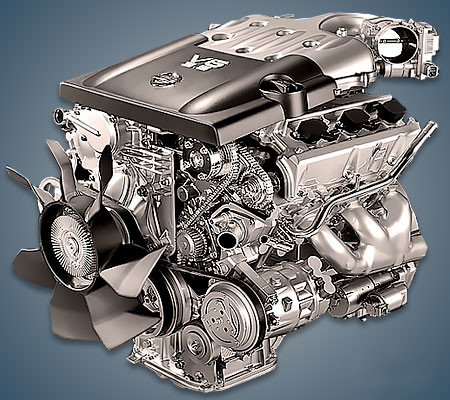 The VQ35 engine is considered one of the most massive engines from Nissan. This engine has won “Best Engine of the Year” many times. VQ35 replaced the VQ30DE unit, which belonged to the first generation of VQ motors.

The 3.5-liter V6 Nissan VQ35DE engine has been assembled at the factories in Iwaki and Decherd since 2000 and put on many prestigious models of the concern, it is especially common on Infiniti. On cars under the Renault and Samsung brands, this power unit is known under the V4Y index.

In 2000, perhaps the most famous V6 engine of the Japanese concern Nissan debuted. This is a motor with an aluminum cylinder block, a pair of DOHC heads and a timing chain drive. On the intake camshafts of the engine there is a variable valve timing system CVTCS. The features of the motor include a nylon intake manifold, forged connecting rods and crankshaft, molybdenum-coated pistons, as well as processing rubbing parts to a mirror finish. But hydraulic compensators are not provided here and the valves periodically need adjustment.

From 2005 to 2006, the 350Z and Infiniti G35 were modified under the Rev-Up index. This version was distinguished by the presence of CVTCS phase regulators on the intake and exhaust, evil camshafts, a short-stroke intake manifold, a more efficient oil pump, and reinforced connecting rods. Thanks to all this, its maximum power has increased from 280 – 285 hp to 300 – 305 hp. The Samsung SM7 was equipped with a particularly environmentally friendly version of the VQ35DE NEO or Nissan Ecology Oriented.

Disadvantages of the VQ35DE engine