In 1993, the 1KZ engine was created and put into mass production. Until now, it is considered the most successful version of the diesel engine. This Toyota engine was able to displace 2L-TE diesel engines from the market in a short time. 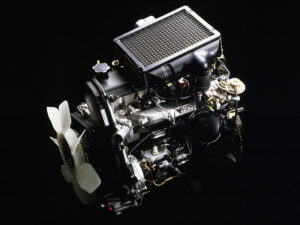 Diesel engine 1KZ-T is a 4-cylinder engine equipped with water cooling and mechanical injection pump. The turbocharged diesel engine 1KZ-TE is equipped with an electronic injection pump. In this case, numerous data from the built-in sensors are used. 1KZ may seem complicated, but in fact, for a specialist it is not difficult to repair. Replacing the crankshaft or any attachment is easily accomplished in a workshop.

For 1KZ, the most relevant problems with the cylinder head. The head itself does not have a tendency to crack, and such problems can be caused by temperature conditions, therefore, it is necessary to monitor the cooling system and the indicators of the sensors.

In addition, it must be borne in mind that: