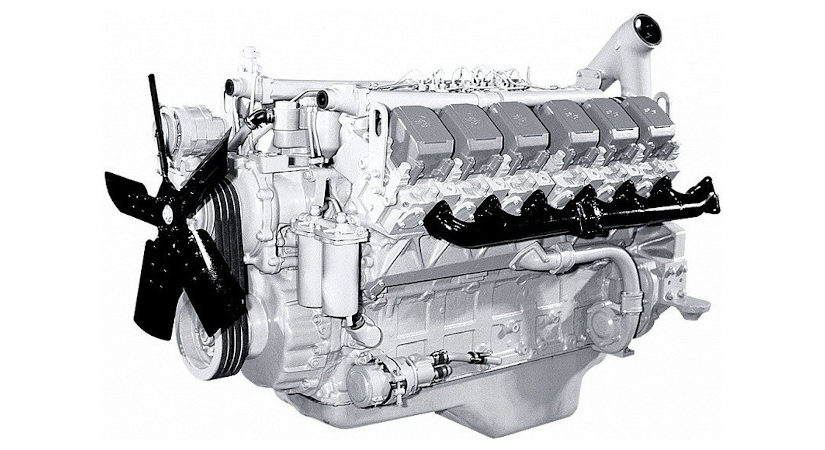 The YaMZ-240 engine is a 12-cylinder diesel power plant manufactured by the Yaroslavl Motor Plant. The technical characteristics of the YaMZ-240 series engines are different, the engines of this family are divided into atmospheric ones – with a capacity of 300-360 hp, and turbocharged ones – 420-500 hp, but all have Euro-0 environmental indicators. The main advantage of the YaMZ 240 series is its high power characteristics, which allow these units to be installed on powerful multi-tonnage vehicles, tractors and diesel trains.

The production of the YaMZ-240 engine began in the 70s. It was the first V-shaped 12-cylinder heavy diesel engine of the enterprise. Some people mistakenly believe that the YaMZ-240 is not a completely independent V12 model, but just two “paired” 6-cylinder ones. This is not so – this family appeared not only by adding 4 additional cylinders to the 8-cylinder engine, but also by changing the angle of their camber, the way of supporting the main journals of the crankshaft and a number of other original design solutions.

This engine model consists of the following functional blocks: 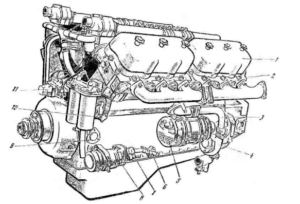 The cylinder block is located in the upper part of the cast housing, in the same place where the upper part of the crankcase is located. The YaMZ-240 uses 12 cylinders. They are arranged in 2 rows of 6 pieces with convergence at the bottom. The tilt angle of the cylinders relative to the central axis is 75 degrees. The right row relative to the left is pushed forward by 35 mm. This is due to the fact that 2 connecting rods are installed on a single connecting rod journal of the crankshaft, separate for the right and left row.

The crankcase of the block is made of gray low-alloy cast iron and is a cast structure. In its upper part there are holes for each sleeve. There is also a crankshaft, a high-pressure fuel pump and a camshaft sleeve. The cylinder heads are located, depending on the modification, separately, or in blocks, each of which is designed for three cylinders. In the upper part of each head, nozzles and spring valves with rocker arms are mounted. 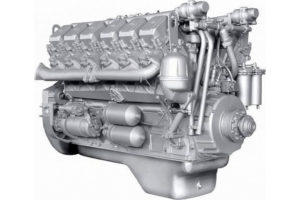 The crank mechanism installed in the YaMZ-240 motor is a crankshaft, a flywheel and bearings. The crankshaft is made of hot-formed steel. The design includes six necks and seven round supports. The shaft journals are also made of steel, but are reinforced during the manufacturing process by electrocution. The shaft is mounted in the crankcase with a thrust bearing. The bearing is supplemented with bronze rings, which act as seals and strengthen the crankshaft retention. All units and equipment of machinery take power from the shaft through the leading edge.

A mechanism responsible for damping vibrations is also installed here. The damper works on the basis of a viscous liquid. It consists of a die-cast body, flywheel, fluid filler neck and protective cover. Centering on the axle is carried out by a separate metal plate. To transmit high torque, the YaMZ 240 engines are equipped with fluid couplings that can withstand heavy loads.

The cooling mechanism installed on the YaMZ-240 diesel engine is a closed-type circulation system. The mechanism works on the basis of the movement of the coolant. This scheme consists of the following nodes:

The centrifugal pump picks up the liquid thanks to the notch between the roller and the bushing. The device turns on after a sufficient amount of liquid has accumulated in the working chamber. The pumping device is driven by a gear connected to the crankshaft. Cooling of the liquid takes place in the radiator, thanks to the air flows created by the fan (driven by the crankshaft). From the radiator, the liquid enters the jackets, where it is evenly distributed. After cooling, hot water is discharged through pipes at the top of the heads. The vapor accumulating in the line is discharged through an opening in the expansion vessel.

The engine has proved itself to be excellent in operation and quite good in repair. Repair difficulties are possible only with old versions of YaMZ 240 with common heads (3 cylinders each). The repair of such engines has become more difficult and a lot of new parts will be required: a new block for separate heads, new individual heads for each cylinder, a new piston group, new exhaust and intake manifolds, new water pipes and pipes, new high pressure fuel pipes.

Despite the fact that the engine has a fairly simple design by modern standards, a long production period, which made it possible to work out the production technology, as with another complex mechanism, certain malfunctions may occur during its operation. The most common of them are: