The start of production of these engines coincided with the debut of the 4th Scania series in 1995. Initially, they were developed as universal, intended not only for the transportation of goods over long distances, but also for construction equipment.

Simplicity and serviceability of the engines of this model were a priority in the development of Scania DSC12. In addition, like any other model from this manufacturer, DSC12 are distinguished by their reliability and high durability. 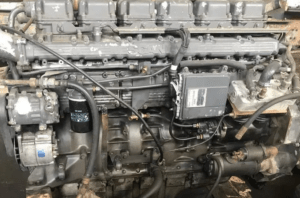 These engines feature 4-valve technology and a new generation of EDC fuel systems, which optimize the combustion process in the cylinder, ensuring greater efficiency and environmental friendliness. Scania’s 12-liter DSC12 engines are highly efficient when compared to most other truck diesel engines.