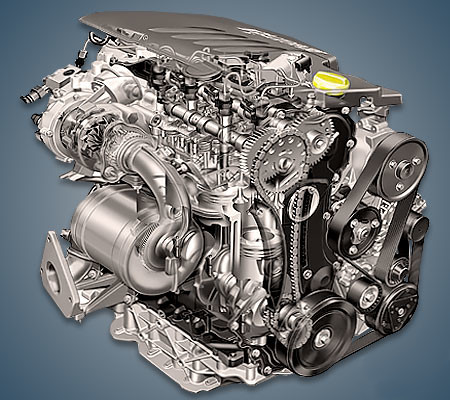 The 2.0-liter Nissan-Renault M9R or 2.0 dCi diesel engine has been produced since 2005 and is installed on such popular models as Espace, Koleos, Talisman, as well as Qashqai and X-trail. There are two generations of diesel, which can be distinguished by their volume of 1995 cm³ and 1997 cm³.

In 2005, a 2.0-liter diesel engine jointly developed by Renault and Nissan engineers appeared. This is a modern unit with a cast-iron block, a 16-valve head with hydraulic compensators, a timing chain drive and a Common Rail fuel system from Bosch with piezo injectors.

At first, they offered three versions of such units, different in power and torque, which differed in the turbine model with variable geometry and different boost pressures:

Since 2007, they began to install a different GTA1549V variable geometry turbocharger. There were also modifications of such a power unit derated to 90 – 115 hp for Trafic, Primastar and Vivaro minibuses, equipped with a conventional Garrett GT1549S turbine.

In 2011, the motor received a Start-Stop system and a variable displacement oil pump. And in 2018, the company introduced the second generation of these engines, which is easily distinguished by a different cylinder block of 1997 cm³ instead of 1995 cm³.

Disadvantages of the Renault M9R engine