The OM639 is a 1,493 cc in-line 3-cylinder diesel engine. and water cooled. The power is 68-95 hp. Power Index: 39 HP for 1 liter of volume. Developed the engine Mercedes Benz and Mitsubishi Motors.

OM639 engine was installed on Japanese Mitsubishi cars. The motor was produced from 2004 to 2006. The design of the OM639 resembles a classic Mercedes engine:

To damp first order inertial forces, the OM639 is equipped with a balance shaft housed in a separate housing and bolted to the side of the unitized block. The balancer is driven by the oil pump chain, and rotates at the speed of the crankshaft, but in the opposite direction. Balancer bearings are lubricated with oil. In addition, a heat exchanger and an oil filter are attached to its body.

The OM639 engine is based on the four-cylinder OM640. Essentially, the OM639 is a stripped down version of the OM640 engine with components such as:

The pistons of these diesels are completely the same, the injection pumps are also identical. The OM639 engine, unlike its predecessor, does not have a 4th cylinder and is installed almost vertically in cars. In addition, compact (short) injectors were created for the OM639 diesel engine, which injected fuel at a pressure of 1600 bar in two stages. 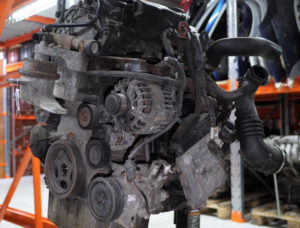 The engine is mediocre. Cases of serious wear are known, due to which the engine was either sent for overhaul, or changed to a contract one.

The engine will not start – in this case, you need to check the starter and high-voltage wires. Wires and terminals corrode and break. The starter itself is weak.

Oil Separator Problems – The cleanliness of the oil separator housing indicates the condition of the engine. Resinous deposits clog it, which causes problems with the pressure of the crankcase gases. They support the pistons and interfere with the operation of the oil scraper rings. Due to the burning oil, the temperature in the combustion chamber rises and carbon deposits form on the pistons and valves. And there is a problem with the cylinder head.

Turbine problems – Japanese IHI RHF3 turbine is installed on OM639. A wedging of the bypass valve was noticed behind it. In this case, the engine may not deliver full power, and then go with more power. Also, the IHI RHF3 turbine can drive oil into the intake, which negatively affects the temperature in the combustion chambers.

Problems with the pipe from the turbine to the intercooler – often the pipe breaks from the side of the turbine, the cuffs at the ends weaken. This can be seen from the fogging up with oil. A situation arises where air “escapes” through a rupture or leaking seals.

EGR valve problems – The valve is stuck open due to accumulated soot and oil, depriving the engine of a significant amount of air. As a result, the fuel does not completely burn out, and black smoke comes out of the outlet.

Problems with the cylinder head – a frequent problem of the OM639 diesel engine is the appearance of cracks in the cylinder head, arising from an increase in temperature in the combustion chambers against the background of a large oil consumption that has begun.