The Cummins 6BT is the best-known engine for the B-Series trucks. The Cummins 5.9 L engine was the first diesel engine used in full-size pickup trucks as an alternative to the large V8 gasoline engines. Production started in 1984. It was developed as an engine for Case agricultural machinery. But in the future, the 6BT was widely used in light, medium and some heavy trucks and buses.

The turbocharged 12-valve Cummins engine became immensely popular in the 1989-1998 Dodge Ram pickups due to its tremendous torque at low revs and throughout the engine speed range, as well as better fuel consumption compared to the Dodge V8 gasoline engines.

The Cummins 6BT engine is an in-line 6-cylinder 5.9-liter turbocharged diesel engine (turbo diesel). The engine has a cast iron cylinder block and a cylinder head. Valve mechanism – 12 valve OHV (2 valves per cylinder), solid pushers. Therefore, the engine is very often referred to as a 12-valve Cummins. There is a timing kit at the front of the engine (without belts and chains). The oil pump and fuel pump are also driven by gears. The engine has a reliable mechanical injection pump (easy to adjust) and fuel injectors. Until 1994, the engines were equipped with a Bosch VE44 rotary injection pump, but some early versions had a CAV rotary injection pump. 1994+ engines are equipped with Bosch P7100 injection pump. All 5.9L engines were equipped with a turbocharger and, since 1991, an air-to-air intercooler. Holset produced all turbochargers – Holset H1C (1989-1993), Holset WH1 (1994), Holset HX35 (1994-1998). To make starting the engine easier in cold weather, a grill heater is installed in the intake manifold instead of the traditional glow plug system.

The manufacturer offered the engine with transmissions such as the Chrysler 47RH (4-speed automatic), New Venture NV4500 (5-speed manual) and GETRAG G360 (5-speed manual). The 12-valve engine was produced until 1998 and then was replaced by a new 24-valve common rail high-pressure Bosch 5.9L ISB Cummins engine. 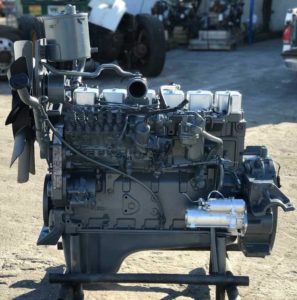 The cast iron cylinder block and head are the basis for impeccable reliability and durability. There are not many electronics and nothing special. 6BT is a simple diesel engine with a mechanical pump and injectors. This makes it undemanding to fuel quality. Cummins 12-valve engines are also renowned for their quick starts in all weather conditions.

But the engine has drawbacks. One of them is a clogged heater grid. It is installed between the air pipe and the intake manifold. Over time, the heating element becomes coated with soot, which restricts air flow to the intake manifold. In this case, the engine takes a little longer to start than usual, and sometimes it dies at idle or at low revs, consuming more fuel. Another problem with a 12-valve engine is called the Killer Pin or KDP. The engine has a steel locating pin pressed into the block, located next to the bolt between the timing gear and the fuel pump gear. The vibration from the motor pushes this pin back slightly. The pin can fall between the timing gears and cause serious engine damage (mixing valves, brake pistons and timing gears). But there are some very cheap solutions to prevent such a dramatic engine crash on the market.