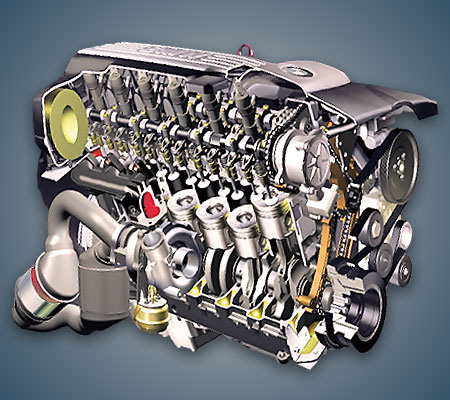 Motors of the M57 series began to be installed on Munich cars since 1998 and replaced the diesel M51. The new M57D30 engine was developed on the basis of its predecessor, it also uses a cast-iron cylinder block, but the diameter of the cylinders themselves is increased. Here is an aluminum DOHC head with 24 valves. The rotation of the camshafts is given by the timing chain, which has a huge resource and under normal conditions, chain replacement may not be necessary at all.

In 2002, the production of an updated version of the M57TUD30 began, the working volume of which was tightened to a round figure of 3 liters by installing a crankshaft with a piston stroke of 90 mm. The turbine was replaced with a Garrett GT2260V, and the control unit here is DDE5. The most powerful version was called the M57TUD30 TOP and featured two different sized BorgWarner KP39 and K26 turbochargers (boost 1.85 bar), pistons with a compression ratio of 16.5, and controlled the entire DDE6 ECU.

In 2005, the M57TU2 version was released, which had a lightweight aluminum cylinder block, updated Common rail, piezo injectors, new camshafts, inlet valves of this engine were increased to 27.4 mm, a cast-iron exhaust manifold was also used, a Garrett GT2260VK turbocharger, a DDE6 ECU and all this corresponded Euro-4 standards. The TOP version was replaced with a new one – M57TU2D30 TOP, which was equipped with two BorgWarner KP39 and K26 turbines (boost pressure 1.98 bar) and a DDE7 ECU.

Disadvantages of the M57D30 engine