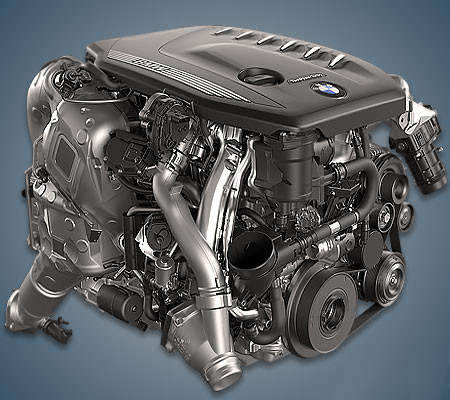 A series of 6-cylinder BMW B57 diesel engines with a volume of 3.0 liters has been assembled since 2015 and is installed on the most popular rear and all-wheel drive models of the German concern. There are three modifications of these power units: with one, two or four turbines.

The six-cylinder diesels of the modular series debuted in 2015 on the BMW 7-Series G11 and featured an aluminum block with plasma-sprayed steel on its cylinder walls, an aluminum 24-valve DOHC head with hydraulic lifters and a timing chain drive. The injection was carried out by a Common Rail fuel system from Bosch with piezo injectors.

In 2020, a series of 6-cylinder diesel engines was updated and the version with 4 turbines was abandoned. The remaining two modifications are now equipped with a couple of different-sized turbochargers and a new CR Bosch fuel system with injection pressure increased from 2500 to 2700 bar.

Engine modifications with one, two and four turbines, with the first two still in two generations:

Disadvantages of the B57D30 engine