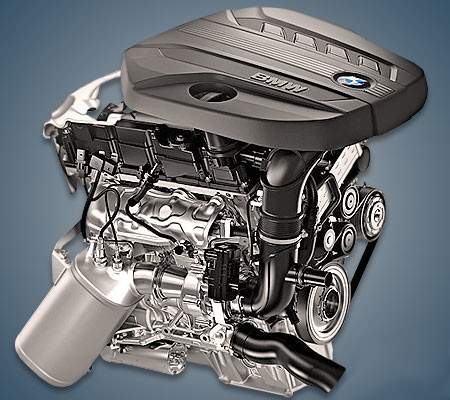 The BMW B47 2.0-liter 4-cylinder diesel engine series has been assembled since 2014 and is installed on cars with front-wheel drive as B47C20, rear-wheel drive as B47D20 and on Mini as B47C20A. These motors exist in two different generations and their updated versions are called B47TU1.

In 2014, the N47 series diesel engines were replaced by new B47 engines from the modular family. Of the features of their design, we note an aluminum cylinder block with a closed jacket, an aluminum 16-valve cylinder head equipped with hydraulic lifters and a timing chain drive. The injection is carried out by the CR Bosch system and it differs depending on the version of the motor: the younger modifications have electromagnetic injectors, the older one uses piezo injectors. Also, the younger versions of the engine have a Garrett GTD1752VRK turbocharger, the older one already has two turbines.

In 2017, the diesel engines of this family were modernized, to distinguish them they are called B47TU1. Now all units have BorgWarner R2S twin turbocharging, and not just older versions, all engines have been equipped with electromagnetic injectors, and not just younger modifications, and the injection pressure has been raised from 2000 – 2500 bar to 2500 – 2700 bar depending on the version. Also, the updated engines received a sophisticated exhaust purification system with AdBlue injection.