The 2NZ-FE engine was redesigned in 2003 due to the introduction of Euro 4 emission standards. The following changes were made to the engine:

Disadvantages of the 2NZ-FE engine 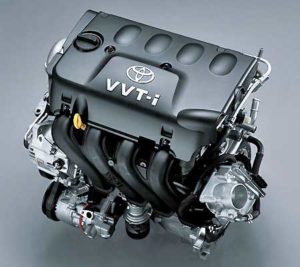 Problems also include: breakdown of the oil pressure sensor, leakage of the rear oil seal on the crankshaft, inability to repair the cylinder block. Most often, upon reaching 200 thousand km of run, the motor changes. The use of quality engine oil will help to increase the durability of the Toyota 2NZ engine.

The Toyota 2NZ-FE has a five-bearing aluminum cylinder block and thin-walled cast iron liners. It has a bore of 75.0 and a stroke of 73.5 mm. The engine has a crankshaft with four counterweights and an integrated crankshaft position sensor.

The steel connecting rods for the 2NZ-FE engine have caps that are held in place by bolts from the plastic area. The engine is equipped with aluminum alloy pistons, semi-floating piston pins and low voltage rings (two compressor rings and one oil control ring).

The 2NZ-FE cylinder head is made of aluminum alloy, which ensures good cooling efficiency. The engine has 2 overhead camshafts driven by a roller timing chain with 8.0mm pitch and 4 valves per cylinder (16 in total). The timing chain is lubricated with engine oil from an oil jet. The engine has a pentroof type combustion chamber and cross manifolds.

The 2NZ-FE used variable valve timing with intelligent system (VVT-i) on the intake camshaft. The intake valves are 30.5 mm in diameter and the exhaust valves are 25.5 mm. The engine has an intake duration of 225 degrees and an exhaust duration of 216 degrees. The 2NZ engine used special shims to adjust the valve clearance.